Spotinst Ocean makes sure that all pods in the cluster have a place and capacity to run, regardless of the current cluster’s load. Moreover, it ensures that there are no underutilized nodes in the cluster.
Metric-based cluster autoscalers are not aware of Pods when scaling up and down. As a result, they may add a node that will not have any Pods, or remove a node that has some system-critical pods on it, like kube-dns. Usage of these autoscalers with Kubernetes is discouraged.

Ocean continuously checks for unschedulable pods. A pod is unschedulable when the Kubernetes scheduler is unable to find a node that can accommodate the pod, this can be happening due to insufficient CPU, Memory, GPU or custom Resource.
For example, When a pod request more CPU than what is available on any of the cluster nodes. Unschedulable pods are recognized by their PodCondition. Whenever a Kubernetes scheduler fails to find a place to run a pod, it sets “schedulable” PodCondition to false and reason to “unschedulable“.
Ocean calculates and aggregates the number of unschedulable Pods waiting to be placed and finds the optimal nodes for the job. Ocean makes sure that all the pods will have enough resources to be placed, it also makes sure to distribute the Pods on the most efficient number of VMs from the desired cloud provider. In some scenarios, it will prefer to provide a distribution of certain machines types and sizes based on the Pods requirements and the Spot / Preemptible VMs prices in the relevant region.
It may take a few moments before the created nodes join the Kubernetes cluster, in order to minimize this time (to zero) you can read more about Cluster Headroom.

Ocean constantly checks which nodes are unneeded in the cluster.
A node is considered for removal when:

Ocean simulates the cluster’s topology and state “post” the scale-down activity and decides whether the action can be executed or not.

Ocean ensures that pods and nodes are gracefully terminated in a case of scale-down or an instance replacement.
Node Termination process is as follow:

Ocean provides the option to include a buffer of spare capacity (vCPU and memory resources) known as headroom. Headroom ensures that the cluster has the capacity to quickly scale more Pods without waiting for new nodes to be provisioned.
Ocean optimally manages the headroom to provide the best possible cost/performance balance. However, headroom may also be manually configured to support any use case.

Ocean allow dynamic resource allocation to fit the pods’ needs. Ocean cluster resources are limited to 1000 CPU cores and 4000 GB memory by default, this can be customized via the cluster creation and edit wizards. 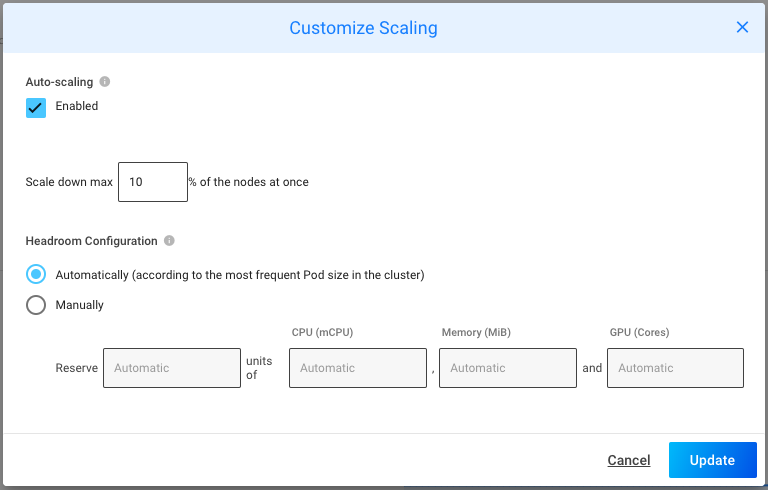